Thought I'd pose some photos of my new chubby chonker chin, Gus gus! Named after the lil fat brown mouse in Cinderella.

He's about 6 months old now. Loves the little wheatie things in the timothy hay and apple sticks! He likes doing parkour wall jumps in his cage, and going bonkers whenever a car/noise outside startles him. When I pet him he likes to groom and nibble on my hand, but doesn't liked being petted on his head. Chin and chest scritchies are ok-ish, he really just prefers to do the grooming! Runs/jumps like a maniac when I try to get him out of this cage. Likes to be awake during the day for some reason. 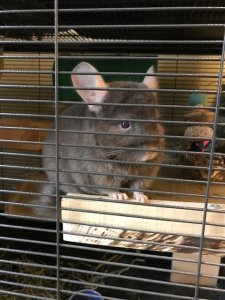 Photo of him and Mr. B's cages next to each other. Hoping/praying Mr. B will one day get along with him. 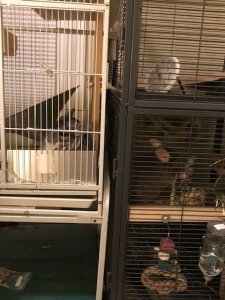 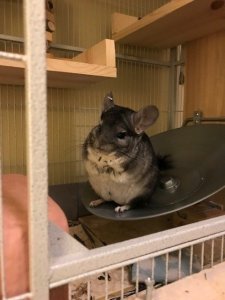 He still gets first dibs on dust baths and snackies.
Last edited: Nov 25, 2020
B

Wow what a beaut! I like the cages too.

They're both super cute!

I recently bonded them and they're very happy/snuggly together. I'm so happy they can get along! ^_^

Another photo of them snuggling. ^_^

I notice Gus Gus likes to glom/lay on top of Mr. B (not humping/grasping him, Mr. B gets mad when he does that). Does that mean he is the dominant one? When I let them out to play though it's Mr B who is occasionally trying to hump Gus Gus.