I am a new chinchilla owner. I recently got a 9 year old male who'd been living alone for a while. He used to live with his dad but has been alone for a while (not sure exactly how long). I've got some questions, so here they are in no particular order. Also, located in Canada, which I just mention since I'm asking for product recommendations.

1. I've heard chinchillas need filtered water. I've just bought some filtered bottled water for now. What kind of water filter am I looking for if I want to filter tap water?

2. Playpen recommendations? I'm looking for something that I can use to block off the section of the room near his cage, using the walls of the room as part of the play space. The ones I've seen like that are made out of wire though, and I've heard mixed reviews on wire playpens. So, wire, yay or nay? Open to other alternatives. Also, any thoughts on what to cover the carpet with in the playpen? What are some good things to put in the playpen?

3. Litter training. I've heard some chinchillas will pee in a litterbox. This guy is 9 - can he learn to use one now or is he a lost cause? If it's worth trying, what should I use as litter?

4. Anyone have good resources to learn about chinchilla care? (Other than this forum). I've read some care guides but they were all pretty basic. I follow some really good youtubers and instagram pages for hamster care and would love to have similar resources for chinchillas.

Okay thats all, for now. Many thanks.

1. If you want to use tap water you need to make sure you use a filter that filers out micro organisms, like giardia. I think this one is one people have said is safe
PUR PFM400H Chrome Horizontal Faucet Mount
Also make sure you aren't using a water softener and the tap water isn't treated with fluoride. I just use a water cooler for my own drinking water so that is what my chins get too.

2. Wire is ok, but not always ideal since some chins learn they can climb it, also you need to make sure the spacing is 1" or less or the chin can escape right through it. Another thing to keep in mind is that chins can easily jump 5 ft if they want to, so most fencing is too short to prevent jumping over, but not all chins realize they can jump that high. I have something like this (I can't find the ones I have anymore in Canada)
Ware Manufacturing Large Canvas 8-Panel Clean Living Small Pet Playpen Cage, White
My guys haven't realized they can jump it yet. Some people also have had luck with this one
Marshall Pet Products Deluxe Play Pen, Small
These style are also popular, and you can stack a couple of them high to make them taller
Tespo Pet Playpen

3. Litter training chins is really more putting a pan of shavings where they already choose to pee, normally a corner. If he doesn't already pee in one spot you can try to convince him to by cleaning up any pee other then in the pan of shavings and hopefully he will eventually get the idea. You can also put a soild rock in the litter pan, for some reason chins like to pee sitting on rocks. For litter you can use kiln dried pine or aspen shavings, but of the two aspen is better.

4. A couple other good places I can think off hand are, Chinchilla Notebook on youtube seems to know their stuff. Also if you are on Facebook I suggest joining The Chinchilla Owners Group

(yes it has a mouse emoji)

Unfortunately a lot of outdated (even "new" is just repeat of old info) and just plain wrong info is out there about chinchilla care. Info on chinchillas has changed a lot in the past 20+ years and new info is still always coming out as we find out the long term effects of some things. One good example is back in the 90s raisins were the suggested go to snack for chins, now we know that they are actually terrible for them and can lead to long term health issues and an early death. So it's best to make sure you have the most updated info and not just assume you know everything even after years of owning chins.
Y

Thank you, that's immensely helpful. Hope you dont mind if I ask a few more questions.

My tap water does contain fluoride, so I guess I'll just plan to buy bottled, filtered water for him.

I like the looks of the tespo pet playpen. I saw on reddit some people recommended taping some cardboard over their baseboard to prevent chinchillas from chewing on them - is this fine to do? My plan would be to cover my baseboards and use the walls as part of the perimeter of the playpen, and then likely the tespo playpen to section off part of the room. I think I'll just put some fleece down over the carpet to protect that. Does this seem like an okay plan?

I know chinchillas are good jumpers but I'm not that worried about the chinchilla escaping the pen because hell always be supervised in it, and if he does get out, hes only going to be getting out into a secure, pet room.

What kinds of things can I put in the playpen? I've seen some people put cardboard boxes but others worry that chinchillas will eat cardboard?

Thank you for the recommendations, I will join the Facebook group.
Y

Another question, I saw on YouTube some cool platforms with an inset for a removable tile, so you could keep a spare set of tiles in the freezer and swap them out.

They seemed really cool, so I'm thinking of making some. Would having tile on platforms be too slippery though? Maybe it's okay if i make a large platform and a good portion of the surface area is wood?

You can put cardboard over the baseboards, that can work so long as they don't try to eat the cardboard. Cardboard is only safe if they don't eat it, most just shred it but some do actually eat it. Cardboard is not really digestible so it can cause a blockage. I realize it's not an option for most people but I just replaced the baseboards in my house with kiln dried pine boards. Here is my set up for around the cage (they also sometimes play in another room) I just put a sheet on the floor (the floor is damaged) but a fleece blanket would work too. 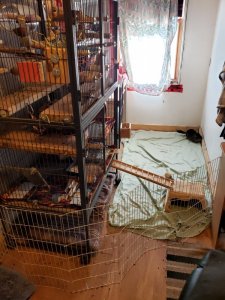 I've used cat tunnels, you can get fleece ones, as well as toss toys like willow balls and cholla logs. You can also make chinchilla trees (like a cat tree but smaller) or even cover a small cat tree in fleece for them to hop around on depending on the size of the area. You can try cardboard boxes, but again make sure they aren't actually eating it, I personally don't see a problem using it for supervised playtime.


yeti316 said:
Another question, I saw on YouTube some cool platforms with an inset for a removable tile, so you could keep a spare set of tiles in the freezer and swap them out.

They seemed really cool, so I'm thinking of making some. Would having tile on platforms be too slippery though? Maybe it's okay if i make a large platform and a good portion of the surface area is wood?
Click to expand...

I'm not sure what you mean by platform with a removable tile, but ceramic, porcelain, and stone tile are all safe to use for chins. I don't think it would be too slippery, some people even tile their whole cage floors so I don't think it would be an issue unless it gets wet or it was just a tile shelf. Personally I just have tiles sitting on the floor of the cage on top of the fleece liners.

All great ideas, love the cat tree idea in particular. Thank you for your help.

What I did is get a few of those plastic protective mats (the ones that are used for office chairs) and put those over the carpet, then covered in fleece. Whenever it gets messy, I clean up the area, throw the fleece in the wash, wipe the plastic mats, cover again in fleece, and it's ready.

That way the carpet is protected from both pee and my curious chin, who has previously taken out a section of a carpet by pulling on individual strings, one by one.

I'd be careful with the height of the cat tree if you are using it inside a playpen. If your chins are like mine, do not underestimate how quickly they can figure out how to use the cat tree to jump out of the playpen and go explore the rest of the house.
Y

Good idea about the protective mats.

Do you have to worry about them jumping off from a dangerous distance? Like if they climb on top of a chair or something? Or are they pretty sensible.

Do you have to worry about them jumping off from a dangerous distance? Like if they climb on top of a chair or something? Or are they pretty sensible.
Click to expand...

My girl is pretty sensible and will hesitate to jump if she thinks she can't make it or if she's weary of the height.

My boy used to Geronimo his way through life. More than once I had to block him from jumping from somewhere dangerous (like the 2nd level of his cage down to the floor, when I was in the middle of cleaning).

Not all chinchillas are good at estimating the danger of height.
Y

Ah I guess I’ll wait and see whether this guys sensible or not.

my gerbils like to climb onto my shoulder while I’m sitting down and consider jumping off. Much like your cat tree, they consider this their path to freedom from the oppressive playpen. I just put my hand up to block their view and this discourages them.

my hamsters have no sense, and will just walk off a cliff, and trust that the ground will be beneath them (which it always is, if you expand your definition of ground to include my hand)
You must log in or register to reply here.
Share:
Facebook Twitter Reddit Pinterest Tumblr WhatsApp Email Link