Today marks one month (I wanted to write this sooner, but I had hoped to let her breeder know privately before posting it here) since my sweet baby girl, Shrimpie, succumbed to worsening congestive heart failure. Shrimpie was born with a severe murmur, and was originally predicted to only live two years, but with proper medical management and a lot of love, she almost doubled that! I miss her like crazy, but am so thankful for all of the extra time we had together. 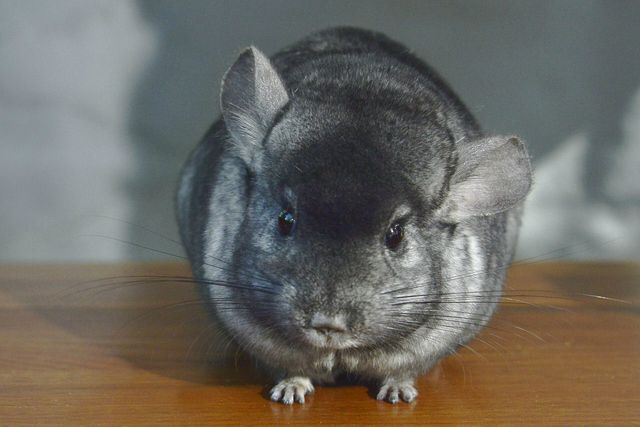 Shrimpie was always my little cheerer-upper. As I was mourning the unexpected loss of my young boy chin, Alfie, a breeder offered me a dwarf "male" that had been born into her herd. This little "boy" had been handfed, was a fraction of the size of "his" brother, and could not run or jump properly. It almost felt as if this little chin had been sent my way to take my mind off of my loss and cheer me up, so of course I accepted. I had no idea how much cheer this little chin would bring.

Just hours after arriving at my house, "Shrimp" learned to popcorn. A week or so later, the vet discovered that my "Shrimp" was actually a Shrimpie, and that she had a significant heart murmur. At that point, I vowed to give her the best possible life I could for however long we had together. In the following months, Shrimpie learned to run, use a wheel, and balance on cage shelves. It was such a joy to watch her blossom into a real chinchilla!

Shrimpie was always a baby and a drama queen. She squeaked and whined like a baby her entire life. If there was ever a mouse in the house, she would shreik and shreik. Having been handfed as a baby, she willingly took to a syringe and was the easiest chin ever to medicate. After one very brief incident, she held a lifelong grudge against her water bottle and insisted upon being syringe watered for the rest of her life. She was most certainly a high-maintenance pet, but her adorable demanding ways never failed to bring smiles through many tough times.

Despite, her heart condition, Shrimpie enjoyed a typical chin's life for almost all of her days. During playtime, I was her favorite toy. She loved to balance on the top of my head. She loved to burrow under blankets and fall asleep next to me. As her condition worsened, she sometimes slowed down, but a quick trip to the vet for a medication adjustment always brought her back to her playful self.

On our final trip to the vet, he maxed out her medications, which again brought her back to herself. She was doing well enough that I was comfortable going out of town for the holiday weekend. The day I was coming home, my mom told me that Shrimpie seemed very weak. I hoped and prayed that she would hang in there until I made it home. At each layover, I called Shrimpie, and my mom said she perked up at the sound of my voice. When I finally got home, Shrimpie mustered up every bit of strength and energy she had, and flew out of her cage into my arms. What a welcome!! We had one final playtime, where she somehow managed to jump up on my back, and as I was cuddling her to put her back in her cage, she took her last breath in my arms.

Shrimpie was my only remaining chinchilla. I am chinchilla-less for the first time in 13 years. I miss her like crazy, but I am so glad I was chosen to be her mom.

So sorry to hear about that. I had a chin with a heart murmur as well as some other issues. It was painful watching them go. Im glad you two got to see each other one last time.

I am so sorry about Shrimpie, RIP little angel.
S