My gorgeous 15 year-old girl, Willow, left us on Friday after what we all, including the vet, assumed to be a minor routine illness. While she undoubtedly lived a long happy healthy life, I never expected to lose her right now. Two years ago, she narrowly cheated death, and since then she has almost seemed invincible. It was almost like she found a fountain of youth somewhere under the couch! I really thought I might eventually have the world's oldest chinchilla. 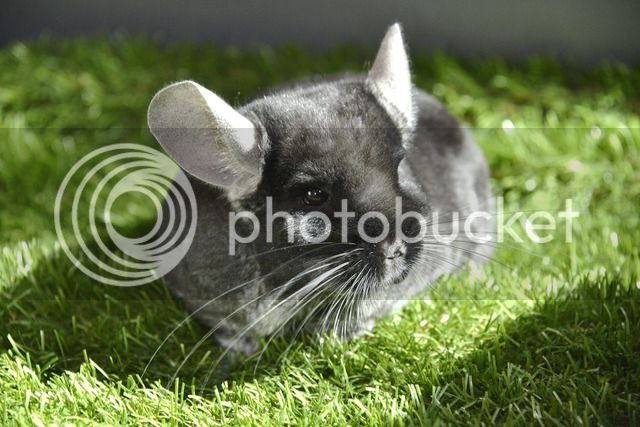 Willow was my third chinchilla, one of my original three of girls. I saw her picture on the previous version of this forum in January 2005, and knew immediately that we needed each other. A bit of research told me she was born on a large ranch, purchased by a hobby breeder, and then sold to a pet home where she wasn't getting the care and attention she needed. Thank goodness that owner had enough sense to rehome her, even though she didn't even tell me her name! Having been bounced around so much in the first few years of her life, this gorgeous girl was understandably terrified and cried her entire first night with me (I cried too). For whatever reason, I had a list of trees on my desk that night, and when I saw "black willow" and "weeping willow", it became clear that I would call her Willow.

She eventually bonded beautifully with my other two girls, and took on the motherly role in their little family. While patient and tolerant with the other chins, she refused to take any @#$% from humans. She was full of black velvet attitude, and made more noise than all of my other chins combined. Sometimes she yelled her opinions from across the room, sometimes she threw things, and if particularly upset, she wouldn't hesitate to spray someone in the face. While she usually hated to be picked up, she was a dream to hold - big, silky soft, and super calm.

Willow was with me my entire adult life. She stuck by my side through three graduate programs, three homes, two states, four jobs, and two serious relationships (she told me how she felt about the first guy in no uncertain terms, and I should have listened to her sooner). Her original "sisters" eventually left her, and new chins came into and left our lives. She was my constant and handled each transition with such grace.

Throughout the years, she became quite possibly the best-behaved chinchilla ever. She was so trustworthy that it got to the point where I could leave her out almost constantly in a my chin-proofed living room. She liked to watch television from the hammock in her cage, but her favorite spot was under the couch. She would spend hours hidden there, awake, listening, and waiting for me to leave the house. She preferred to come out when no one was home; I'd usually only catch her out in the middle of the floor if I had to come back inside for something I had forgotten. The rest of the time she preferred to move about silently in the shadows. On Friday, I watched her crawl under the couch for the very last time. For years, I've known that she'd want to go there whenever her time came.

Words can't describe how much I miss her. My schedule was built around hers. My house was arranged around her needs and desires. Everything reminds me of her. Despite how much I'm hurting right now, I am so incredibly lucky to have had her in my life for the past 11.5 years.

My heart sunk when I saw her name, RIP Willow, we have followed your adventures for years.