I was playing with Mr. B today and he pee'd on one of his cardboard play boxes. After the urine dried up I noticed there was a white residue leftover. 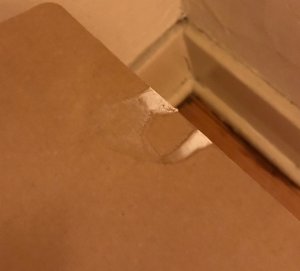 After doing a bit of research, there was a past thread where a member said it's calcium being excreted, which is normalish but sometimes caused by a high protein diet. I kind of wonder if some of the hay I've been feeding him lately has higher protein in it caused that? Like Mountain Grass, oat, and 3rd cut timothy have higher amounts of protein. (been feeding him diff grasses in my efforts to get him to gain weight/keep molar spurs away) He MIGHT be a picky lil eater and only eating the tasty grasses and not enough regular/2nd cut timothy. :/ Hard to tell bc I mix the grasses together. He super loves the 3rd cut Timothy tho.

Should I do anything to try to adjust his diet? I was feeding him a bit of alfalfa this week to help with his appetite/weight gain, and his pellets are Oxbow (also alfalfa). I was thinking of switching to Sherwood at some point, I wonder if that would help?

Other than that, his urine is an orange-ish color on his cage bedding which I heard is normal? He does pee and drink water more now than he did the first month I had him.
Last edited: Feb 19, 2020
D

I'm not familiar with the white residue. I did have some hand bonding treats for mine and it made their urine a darker. It was the culprit because after they were gone the urine went back to the normal color. I thought it was blood!! freaked out- looked up "normal chinchilla urine" and gobbled up all the information. My google history is probably pretty interesting for someone who isn't familiar with Chins. lol. (I found this when I was looking at my pee ! Chinchilla, rabbit, guinea pig urine discoloration-red, orange, white)

I started supplementing different hays or like compounded bricks of hay as enrichment. Kinda busting it open. I didn't want them to get used to it in the cage so it's only at playtime in an effort to keep them eating what they're supposed to..it's seemed to be working...I don't know why but they're pulling out the timothy hay like they're supposed to more than they did before I supplemented this and I see them munching on it in their cage. My thought was they were just getting bored.

Now you've given me more searching power to look up all those hays!
Last edited: Feb 19, 2020

It's ammonia and quite normal.

If you only noticed it once the pee was dry it's fine and normal, the chin is just peeing out excess like it's suppose to. If it was milky looking pee coming out then you have a problem.