We just united our four Chinchillas together!!!! and our story... 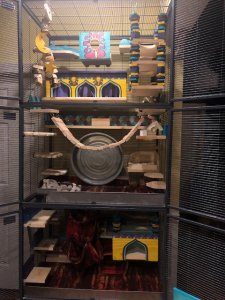 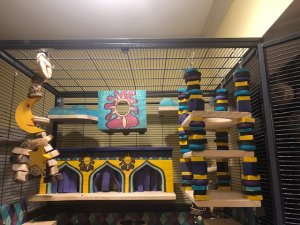 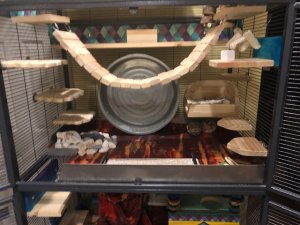 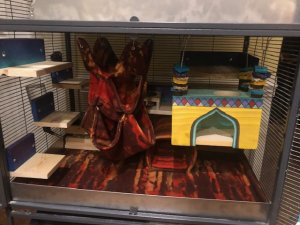 and our story...
Unlike many of you and against any advice I would ever give anyone, we got chinchillas without knowing much about them.
I'm a mom of six and we are huge animal lovers, homeschoolers with a lot of time to spoil our dear animals. We were a home of dogs, cats, and my daughter's hamster.
She saved up her money to purchase her own hamster, bought from Craigslist without knowing age, etc... but her dear Bubbles died about a year into being welcomed and loved at our home.
I wanted to heal her heart and thought, "what can mommy do to get her through this?". I found a chinchilla on Craigslist and thought that might heal a broken heart. I knew little about chinchillas and of course, would never recommend what I did to others, just being honest and sharing our story. He came with a nice sized cage (so we thought), and it was only after bringing him home that I read he might need a friend. His previous owner said he had a cagemate who had died previously.
Within a week I realized I wanted to provide him (Hamlet) a cagemate thinking I was doing what was best for him, not because we wanted another chinchilla necessarily. I found a female on Craigslist from a sweet young gal about four hours away and into the car we went for an 8 hour round trip ride to get the sweet girl chinchilla, ARTEMIS.
In their two-level cage (not a "nation") they got along very well and cuddled pretty instantly.
Instantly I wanted to do what was best for them and bought them a THREE level "nation" cage (not certain if Ferrett nation or other nation), I had custom houses, ledges, fleece, and metal pans outfitted in the cage and we loved them both dearly. We educated ourselves on all things Chinchilla and admit had we done so previously we might not have gotten chinchillas, but with that said we loved them dearly. Sadly about four months into ownership, this is hard to admit publically but want to be honest so others learn from our situation, our dear Male got out of his cage and was found in our livingroom bloody and deceased. I suspect one of my dogs killed him. We were devastated!!!! We are convinced that the closure setting on our cage is not lined up well and now take every precaution to ensure the cage is closed correctly, BUT if you look at pictures the closure is not as automatic as it should be, we need to triple check, quadruple check with each closing.
I spent a few weeks looking for the perfect girl to join ARTEMIS knowing how well she took to HAMLET and wanting to prevent babies. I found one that had a great personality and made a four-hour drive to get "her", we named her Ophelia from Hamlet's girlfriend in Shakespeare...
About six weeks later we had two baby chinchillas, totally didn't see that coming (and I was a Biology major and work in the medical field, go figure)...
While our new "girl" didn't seem to have any parental responsibility in these babies we did find out "she" was a HE and Ophelia became OPHIE!
So these precious babies were the result of Artemis and our deceased Hamlet and were so very welcomed.
Artemis was a great mom, we separated the new "girl" who was a boy to the top 2/3rds of our cage, and mommy raised the babies until we separated the boys and girls. We decided to keep the babies, the relationships seemed totally fine with two boys and two girls separated, but we dreamed of having them all together. Every few weeks we would have them take turns girls on the top 2/3rds of the cage and boys on the bottom 1/3rd and then switch them. We used the same dust baths between them with our goal always being to combine them.
Many urged us to just get two cages, our home is a nice size but we do have a huge family and I just couldn't see having our home taken over by huge cages (just being honest).
About nine months after the birth of Banquo and Macbeth I drove four hours to the DC area to SEAVS exotic pets in Northern Virginia to get my two boys neutered. SEAVS is also known as Stahl Exotic Animal Vet. They were AMAZING!!!!! Dr. M did the surgery and we had zero issues!!!!!
Thanksgiving was our date to try to get all four to live together, and I think the task of doing so was intimidating to us. We would each take the four out, hold them in our hands, kind of switch places to introduce them on the sofa, shared dust baths, moved them to each get their turn in the 2/3rds space vs the 1/3rd.
We just in the past hour have put them altogether!!!! Everything appears good so far!!!! We spent a good hour on the sofa holding them, moving around so they could mingle while we held them and I did cut their whiskers.
I will keep you posted.
I had so much to share based on my experience that I thought I'd do so all at once. The good, the sad, the unprepared, the loving intentions. 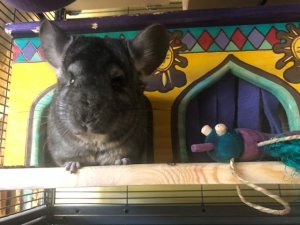 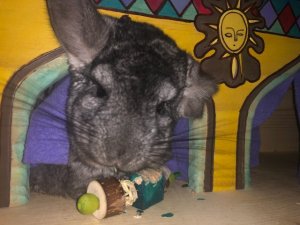 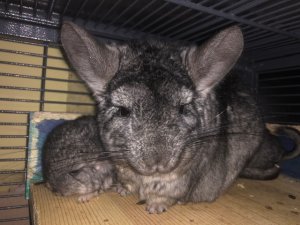 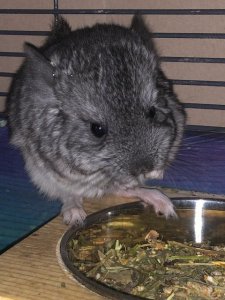 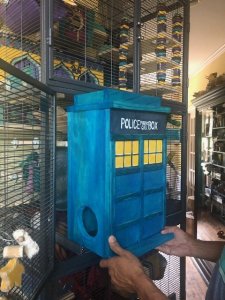 The Tardis (Police box) added after initial cage set up of Taj Mahal theme
ALL made by wonderful Christine at Twilight Chinchillas, we had so much fun!!!!!!
I had to go back and looks at old emails but beautiful "Chin chews" were made by TJs Chinchilla Supplies and AZchins
You must log in or register to reply here.
Share:
Facebook Twitter Reddit Pinterest Tumblr WhatsApp Email Link