Hey guys! Today we got our first ferret nation cage for our chins. It was pre-owned by my niece and we got it for free from her. We cleaned it three times thoroughly, and then started construction on it to make it "chin-safe" and "chin-proof" because my chins are EXTREMELY good at escaping

I have one homemade shelf and a set of 4 homemade climbing pegs, and one of the original ferret nation plastic shelves (that we're going to cover in anti-pill fleece.
We made a false bottom out of wood, and filled it with bedding so they wouldn't be on wire constantly, and it just unlatches and drops out for easier cleaning.
I do have a few questions though! Is there a jumping distance that is safe or unsafe for them? They have about a 1.5 foot hop to get to the first shelf, and then they can climb across the wood pegs to the top shelf. But im concerned theyll decide to hop down all the way from the top shelf, which is like 3.5 feet. I know they can jump 6(ish) feet, but is it unsafe for them to hop down that far onto the bottom made of wood that had bedding on it? Is there anything i SHOULD specifically do to the cage to kind of keep them from hopping from the top all the way down?
Also, how many shelves do you guys have in your Cages? Is there such thing as too many? I was thinking probably like 6? I have about a 4 foot tall cage.
Any info and ideas are appreciated! I want to turn this cage into a really cool home for the two that are living in it! And then i will be doing some work on my two older cages for the other chins to update and make them more exciting for them.

I would have just left the bottom pan in the cage, or did yours not come with the bottom pan? The wire is suppose to be just for holding the pan not for walking on at all so it's good you made a wood bottom, but I don't understand what you mean by latching it. Maybe you could post a pic, maybe I am misunderstanding, are you sure you have a ferret nation cage? The FN cage is pretty much escape proof unless one of the doors or bars are broken.

You want the ledges no more then about 6 inches apart horizontally or vertically. A fall of more then a foot can seriously hurt them, so make sure you over lap things so they can't fall far, a jump is one thing a fall is another (think the difference between jumping off a table vs falling off). Is the middle level also removed? If so you want to make sure you over lap things so they can't fall, I replaced mine with 2 cage width long boards as well as hammocks. Total I currently have 2 cage width long shelves, one of the half cage shelves the double FN came with, 5 small ledges, 3 lava ledges, and I think 11 perches. It sounds like a lot but here is a pic of my cage to show you what it looks like. 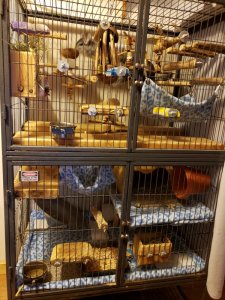 cool ill be sure to put lots of shelves in it! We just made and added two more so they dont have to jump as far and such, and i added an anti-pill fleece hammock. Tomorrow we're wrapping the shelves in fleece as well so they have some cozy padding to sleep on or jump onto. We're gonna keep adding little by little on pay-days. But i just wanna make sure they have the essentials to be safe right now til i get paid tuesday.

This is a REALLY old cage. My niece said it was a ferret nation one, but its a way older style, not like the style you have. Who knows, maybe she was wrong about what brand. But as far as she said it was an old style ferret nation. The doors also have a sliding bar that slides over them to keep the door shut, but we added locks to that because we knew they could probably slide the latch and release the door which would drop open. I can add a pic of it, with what we have so far!

I doubt that is a FN (unless by "very old" you mean well over 50 years), but now your description of the cage makes a lot more sense. The "old style" (and I think original) FN cage looks identical to the one I have only it has screws holding it together instead of snapping together.

That cage you have looks a lot, if not exactly, like the foldable cage that came with my current two, the FN is not foldable. I have no idea what kind it is I have never seen another but I think it might be the old style folding ferret mansion, it's nowhere near the quality or sturdiness of a FN cage. I think mine had spring hooks that the previous owner added kept the cage held down. It had no plastic shelves when I got it, think it had 3 wooden shelves in it and a couple ledges, it was pretty bare and I don't think I have any photos of it. I hated it because it became very heavy when adding enough stuff to it to make it more interesting for the chins.

Just a few other things looking at your cage, the hammock is not chin safe, the only fabric that is safe for use is anti-pill or blizzard fleece, it doesn't unravel if chewed so no strings to tangle in the gut or catch a foot or neck. Also the log looks like one of those edible logs made of sawdust and honey, those are too high in sugar for chins. Lastly what are you using for shavings? The only safe shavings are aspen or kiln dried pine, that looks like it might be cedar, which is toxic. You may also want to look into change the water bottle for a glass one or atleast put something to block it so the chins can't chew it.
A

you will need good quality wood shelves for that cage.
Try plywood cut to size workshopce

I definitely would not use plywood, it is not safe to use at all. Most if not all use toxic glues to hold it together, so it would make the chin very sick and/or kill the chin if it chewed on it (which is the whole point of using wood shelves instead of plastic, they should be safe to chew on).
You must log in or register to reply here.
Share:
Facebook Twitter Reddit Pinterest Tumblr WhatsApp Email Link