Help with an injury

The cat got Governor's (my chin) back leg under a door and partially degloved it. We have been to the vet. She's on antibiotics and wound ointment along with a medical rinse several times a day. It was healing beautifully until 5 days in. That's when Governor started chewing on it. Every time it closes up she reopens it. I met with the vet again yesterday and we changed the ointment hoping that was what is making her chew it. Unfortunately that's not it, as she has reopened it again today. I'm looking for ideas to stop her from messing with it. They don't make cones small enough for her. We have tried the paper plate cone but she ripped it off in an hour. Any ideas?

Most cones (like what they use for dogs and cats) are made from plastic, so I wouldn't feel great about using one on a chin even if it did come in the proper size. She'd probably just chew through it, potentially harming herself in the process.

My guess is that she's chewing it because it itches. When wounds heal and start to scab over, they often start to itch something awful. I've even re-opened some healing wounds of my own because I couldn't deal with the itching and ended up scratching the hell out of it (sometimes in my sleep). I'm one of those people who has like zero tolerance for itchiness, haha. I scratch mosquito bites until they bleed, because I'd rather they hurt than itch. So I can relate to your chin!

You could ask the vet for some anti-itch ointment and see if that helps (something like hydrocortisone often works well on humans and larger animals, though I don't know if it's safe to use with chins, so definitely check with your vet, don't just go out and buy some). If you do get something to help with itching, you'll want to apply it primarily to the edges of the wound, as that freshly healing/regenerating skin is usually what itches the most.

If anti-itch ointment is not possible or doesn't work, the only thing I can think of would be to try to make some sort of collar out of anti-pill fleece, since that's one of the only "chin-safe" materials (outside of certain woods). It doesn't unravel, so it doesn't pose the same risks when chewed as other fabrics (or plastic, which can come apart in jagged pieces). Only issue is that it's not at all rigid, so I don't know how effective it would actually be. Still, it might help if you made it long enough, though she may struggle to eat with it on, so you might have to either hand-feed her or remove it (with close supervision) a few times a day to let her eat on her own. Or maybe you could sew some stainless steel wire into it to make it more rigid? I dunno, just spitballing.

Maybe someone else who has dealt with a similar situation will have some better solutions to suggest, but those are the only ideas I can come up with.

They actually do make cones small enough for rodents, most vet offices don't carry them though so you have to get them online.

Some people have had luck with these ones
https://www.amazon.com/dp/B07B6RSKN...9cQg1ckmJQG8DSOS_pB9eCot9WlAM&pldnSite=1&th=1

This person also makes custom fabric ones specifically for chinchillas 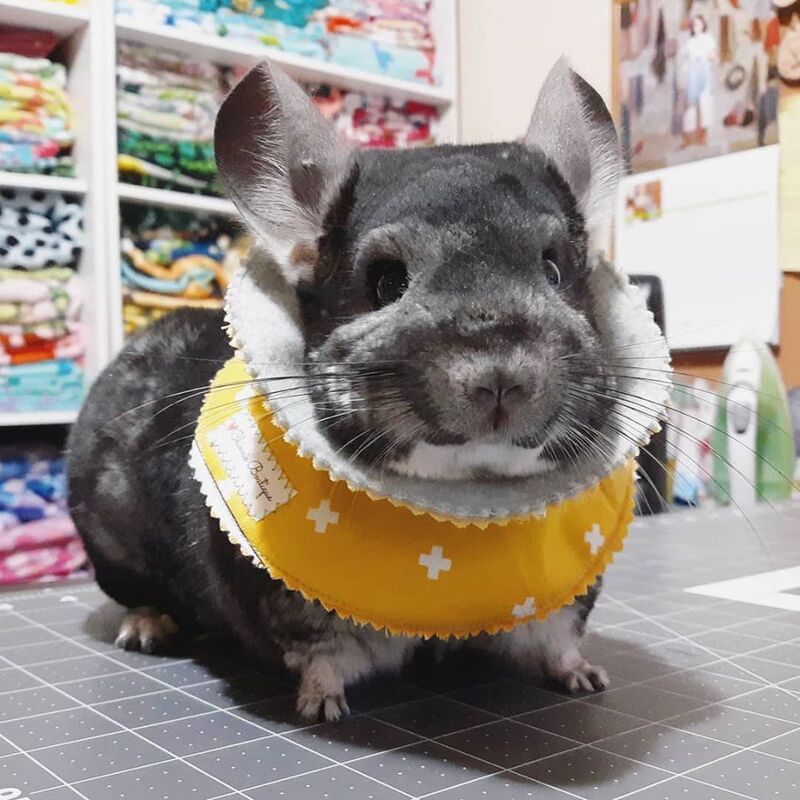 Soft E Cones are great for animals who recently had surgery or need to leave areas alone to heal. They are 1 for $25.00 or 2 for $40.00 Hard plastic cones are also available: Short and Long...
letslovechinchillas.weebly.com

You can also try ones for birds

Another option I've heard has worked for some is the vet made a cone using old x-ray film and just cut it down to size.
A

Thank you! My vet said he used to make them from xray film but since it's all digital now they don't buy the film any more. I ordered a cone from Amazon. I was completely unaware they made them in rodent size. Hopefully this will solve the problem!
You must log in or register to reply here.
Share:
Facebook Twitter Reddit Pinterest Tumblr WhatsApp Email Share Link