My chinchilla has some hair missing on her tail for a couple months now took her to the vet they said it might be a fur slip and to just monitor the growth but hair hasn't grown since and it seems to have gotten worse not sure why or how this happened but she acts completely fine. 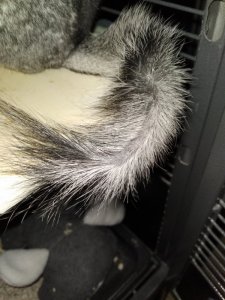 It could be a fur slip, tail fur doesn't shed like the other fur so if can take 6 months or more to grow back. Another possibility is fur chewing, do you notice her chewing on it? Or does she have a cage mate that might be? My last thought is could she be rubbing the fur off? Maybe sticking her tail through the bars alot or something.
C

I never see her chewing on it and she doesn't have a cage mate. Is there a way to tell if it's something more serious like a fungal infection? I really don't want to take her back to the vet and they do nothing again but, I'm also worried about her.

Normally fungal infection like ringworm causes itchy red flakey skin, which it doesn't look like it, and I would assume the vet would have noticed. Even if you don't see her do it she still could be chewing on it, especially if the area is getting bigger. Chewing can be caused by pain, maybe she injured her tail or something. It might be worth getting a second opinion if the first vet was no good.
C

Update
I caught her chewing on her tail not sure why though I have a lot of different toys for her to chew on and she eats properly. She chews on her toys when she feels like it, not really as much as she did when I first had her. I have an appointment with the vet soon and I just hope they don't blame me when I am trying my best and just worried about her.
P

Fur chewing can be caused by a number of reasons, pain, stress, boredom, habit, some just enjoy grooming & take it too far. That said, it’s also an inherited/learned behaviour. Some will pick it up from a cage mate that likes to over groom, for others it starts as something caused by something like pain/stress/boredom & becomes a habit. Then there’s those that learn it as a kit if mum is a chewer. Some it will be ingrained in by mum as normal grooming behaviour & they’ll chew from being kits, others forget about it, then randomly remember it later on down the line & pick up where mum left off.
It’s not something that causes damage as such to the chin since the fur will grow back, all be it slowly, but myself & most breeders I know usually won’t breed from chins that chew. My Goldbar girl who was supposed to be for breeding learnt it from her mum, she’s chewed every female she’s been paired with since she came to me, so I have no plans to breed from her anymore.
Unless there’s an obvious problem with your girl like an injury or illness that’s a potential chewing trigger, your vet more than likely won’t have any definitive answer for it anymore than you do, so don’t let them make you feel bad, sometimes these things just appear for no apparent reason & stick with them. As long as she’s not actually damaging the skin it won’t hurt her.

I’ve been battling horrible fur chewing with my little boy for 2 years now. We moved from San Diego to LA County and none of the doctors I’ve taken him to know why he’s doing it. They’ve done fungal testing, topical flea meds, blood work, & X-rays… he has multiple enclosures in my room, has playtime every evening, and has an AC unit. I’ve recently changed his brand of dust to see if that helps.

Best wishes to you and your baby!

My girl Kiwi somehow broke her tail. I don’t know how she did it, but her tail used to curl over and now it’s just straight. She has some arthritis at the base of her tail and she chews the fur there. She gets Meloxicam every day for the arthritis. I never see her chewing it either, but it has never grown back, the area doesn’t get any bigger. She is 14 years old and this probably happened about 3 years ago.
You must log in or register to reply here.
Share:
Facebook Twitter Reddit Pinterest Tumblr WhatsApp Email Link