Status
Not open for further replies.

So,
I went to the shelter today. Usually don't on Tuesday, but the degus I was fostering were getting adopted and I had to meet the adopter there.

I walk in, sit down, and look out the window. I see a truck pull up with some white thing in the back of the bed.
I overhear him telling a staff member he has a chinchilla to turn in.

It took a few minutes to get the paperwork filled out and filed.
When the man brought the cage in the lobby my heart sank.

In the corner was this little (light) ebony chinchilla who was so overheated from direct sunlight in the back of the truck bed all the ride there.. and while they were filling out paperwork.
It looks like he had been sitting there for days though, as the corner he was in had nothing but urine under the guard.

We took him to the back and I sexed him and went straight to trying to get him cool.
This poor baby was a few minutes from death, so I was given an ice pack and held him on it (with a towel covering) until a ceramic bowl froze in the freezer. He wasn't even responding to me and I thought he was dead already. This was around 1pm. He sat in the frozen bowl and ice pack until around 2:30 when he cooled down enough to become responsive again. I had also been cooling his ears with a cool damp cloth throughout.
I wrapped him in a towel and brought him in the lobby.
At around 2:45-3:00 he was given sub-q fluids and that seemed to perk him up a bit more.

He's my new foster baby until he gets better and can be adopted.
He's still very very weak and can't really walk around or move without shaking horribly, but he is getting some much needed rest..then I will try to feed him some soaked pellets.

Here are some of his pictures.
1 - In the frozen bowl with an icepack under the white towel. Chin-chillin!

2-3 - feeling a bit better after some sub-q fluids. 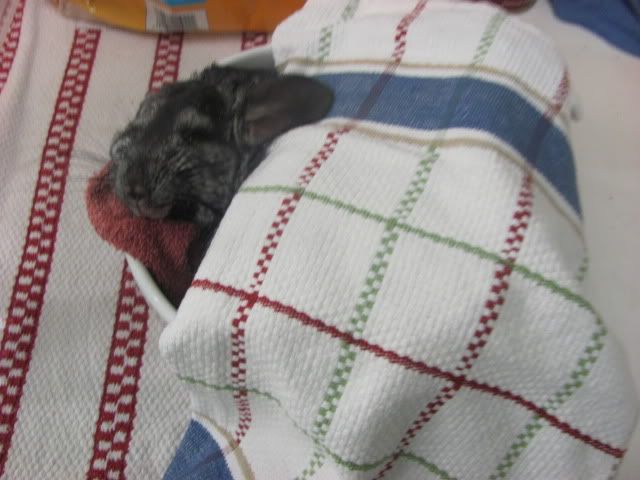 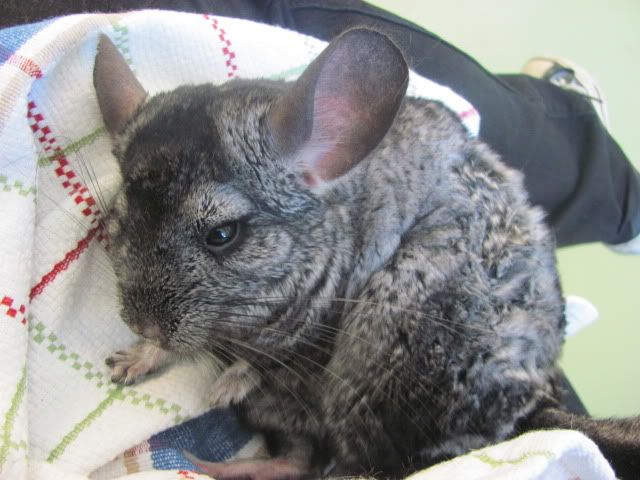 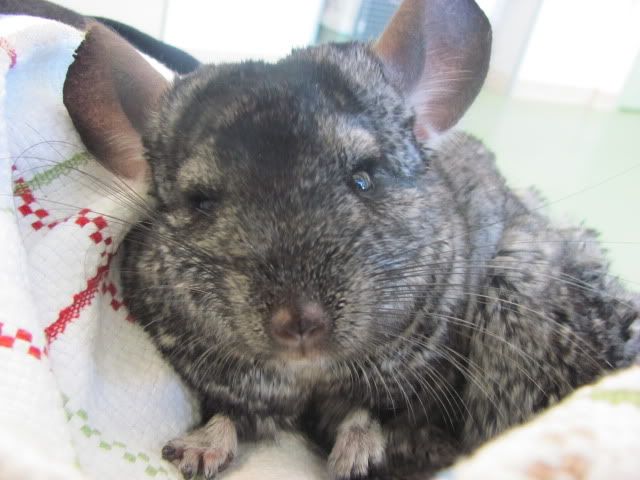 He really needs a name..any suggestions?

Name him Nick, as in you got to him in the Nick of Time!

Aww, I think that name for that reason too! Thank god he was turned in then and not any later. Poor thing. You should keep him! lol. I hope he gets better soon and finds a good home this time. He's adorable.

That poor little guy! I'm glad you where there to save him. Geez a name. I've had my new chinchilla for three weeks and haven't found the right name yet.

Sent from my MB855 using Tapatalk 2

Thank goodness you were in the right place at the right time! Best of luck!

I think I'll give him some baby gas drops.
He hasn't pooped since..3? 3:30?
I'm guessing it's because of the over-heating and the fact he's bloated.
He's barking right now..so hopefully he's not un-comfy.

Poor thing!!
He's such a cutie too, best of luck with him!

poor chinny, it was just fate that you were there when you were.
i like nick. he looks like a nick.
good luck. hopefully he makes a fast recovery and a new home.

what a wonderful coincidence you were there to help save him

Who knows what would have happened if the owner hadn't come in to surrender?

It's between packer and nick as for names, but I'm afraid I shouldn't name him right now until I see him improving.

He seems to WANT to eat..but will only eat a single pellet before he turns away.
Still no poops. I just shot a more effective amount of simethicone in his mouth. He licks up the drops that fall. I guess I'll hve to had feed him and somehow burrito wrap him as he won't take anything from a dropper. I know he's also got to be thirsty.

I personally would never self-vet a sick rescue. There is no health history on this chin, its not eating or pooing, it looks ill. Chin needs a exam and x-ray by a vet and a rx for meds for at least the motility issue.

He is taking a bit more food this morning. I think he was just so exhausted last night.

ticklechin said:
I personally would never self-vet a sick rescue. There is no health history on this chin, its not eating or pooing, it looks ill. Chin needs a exam and x-ray by a vet and a rx for meds for at least the motility issue.
Click to expand...

I agree. Hard telling how long he went without food. His GI system may have shut down due to that gone into ileus which requries medication.

It's a great thing you were there and help this poor lil guy. I swear some people:banghead:
I agree with the above post on having him looked at by a vet. I've had some that came in, barely eating, alert, but still had my doubts. One time out of the 3 rescue 1 was fine. 2 had starting point of gi. It's something to consider.

The shelter doesn't open until 12..and then I will see if there is a vet that could see him for it. I'm not sure how that works with them- it's not like exotics are common there.

If you are going to rescue you need a vet lined up and you need to be able to pay for it, its not fair to the chin to go through all this and be self vetted.

Aww.. I hope he recovers soon! Poor little dude! Thank goodness you were there!

Status
Not open for further replies.